BROMONT, Québec – For most of us, big wheels are for vintage toy tricycles and giant wheels for monster trucks or forestry machines. Zeal Motor Inc. believes otherwise.

The one-year old start-up, with headquarters carved out of the former Hyundai plant in Bromont, at the heart of Québec’s Eastern Townships, had its official corporate launch in January 2019. At that time, it also unveiled the first in a series of industrial utility vehicles with extreme off-road capabilities that it aims to produce in coming years.

Simply put, ‘Fat Truck’, as it is called, is a slick, elongated box made of aero-grade aluminium, with a stout tube chassis and exoskeleton, mounted on gigantic wheels supporting ultra low-pressure tires with stout paddles.

Its identical height and width, non-existent overhangs and large tinted windows give it a cool, if slightly unreal and cartoonish look. That overall look, along with details and finishing touches, are the work of award-winning industrial designer Martin Aubé.

The driver and front passenger literally climb in through a large, side-opening front door, with a clever and compact steel ladder that neatly stows between the two seats. Six more passengers can climb in through the rear door and settle in side-mounted, flip-down seats. Short cab versions, pickup-style, with or without a dumper, will also be produced.

The machine that could

The idea for Fat Truck came when the founders, with almost 60 years of combined experience in the industrial vehicle and automotive industries, were seeking marketable solutions for clients with extreme, off-road transportation needs. People such as those building or maintaining power lines, pipelines, telecom towers and wind farms, or those leading search and rescue operations over exceptionally remote and/or inhospitable terrain.

“We stumbled upon this recreational vehicle with oversize wheels,” says Zeal Motor president, Maxim O’Shaughnessy. “We tested it and thought that if we combined these wheels with the core features of an industrial-grade machine, we would have a breakthrough [product] that would put us in a unique position on the market.”

That vehicle was the Russian-designed Sherp, semi-famous for videos that show it scooting over rough terrain and paddling through water and broken ice, with its four giant tires spinning merrily. The three partners found it effective but difficult to drive, rather crude and quickly filled with various fumes, inside.

Zeal would aim far higher in terms of comfort, refinement and safety.

The actual development of the Fat Truck started in May 2018, in the Bromont shop. At that time, Zeal Motor had 2,000 hours of engineering work already completed, led by VP of engineering, Benoit Marleau. The team then worked flat-out, with its network of top-tier suppliers and partners, on the first finished prototype that was unveiled in January.

According to O’Shaughnessy, a start-up like Zeal Motor needs to push all aspects of product development in parallel, testing included, if it wants to be competitive and profitable: “If done in sequence, the process would take six or seven years”.

This process has already led to significant changes. In a field test conducted just after the launch event in January, the prototype did not reach its target speed while climbing a steep hill on snow, with a full load of eight passengers on board. A decision was quickly made to switch to a larger, 2.2-litre four-cylinder Caterpillar turbo-Diesel engine instead of the 1.7-litre, three-cylinder unit originally installed.

Horsepower goes from 40 to 67 hp and maximum torque from 92 to 153 lb-ft, substantial gains, in both instances. This will mean changes to several related components, including a larger cooling radiator, but the hydrostatic transmission, good for 120 hp, will remain untouched.

The Fat Truck is controlled entirely with a joystick mounted on a slender centre console. It can thus be operated from either one of the two front seats, although switches for the lights, heating, wipers and horn are currently mounted on the left side of the cabin. You push the stick forward to go, tip it to the left or right to turn and pull it back to stop.

The FT turns in its own length, pivoting around the stopped wheels on the side chosen for the about-face. Braking – or let’s call it deceleration – is also achieved by the hydrostatic transmission itself. Mechanical disc brakes are applied automatically whenever the vehicle stops and released when it moves again.

Tire pressures are key to the FT’s performance over various terrains. The driver selects one of four driving modes: snow, mud, trail or water, on the small electronic screen rising from the console. Pressures are then automatically adjusted in relation to the terrain that lies ahead, or lack thereof. The lowest pressure is for snow, in order to get the largest contact patch, and the highest for water, since additional compressed air increases flotation. The large, transverse paddles do the rest.

Zeal says the Fat Truck can go uphill and downhill on up to 35-degree inclines and navigate a slope tilted sideways, at up to 30 degrees, without testing the solidity of the rollover structure. Speed is capped at 40 km/h on land and the FT should splash forward at up to 6 km/h.

The FT comes standard with a fire extinguisher (5 lb. ABC), a first aid kit, a lockable fuel cap, bumpers front and rear, an operator and maintenance manual and a spare parts catalog on a USB flash drive. Options include a roof-mounted AC unit, brush guards, a roof rack with a ladder, exterior mirrors, rear seats with safety belts, a search light with remote control, LED light bars and beacon light, Bluetooth radio with speakers, backup camera and sensors, an inclinometer and a roof hatch, just in case. You can also get full remote control, a winch, an additional battery, a cold weather kit, a hitch and the matching trailer.

The starting price, for a closed-cab Fat Truck 2.8 C, is $US 120,000, calculated with a mind to typical rental rates for industrial machines. The warranty is good for one year or 1,000 hours, whichever milestone is reached first. The primary markets targeted are the United States, Canada, Australia and Scandinavian countries.

With commitments for 30 vehicles, Zeal Motor will start building pre-production units in April, then send them out into the world and run a tight program of upgrades, updates and eventual fixes. We’re just waiting for a test drive. 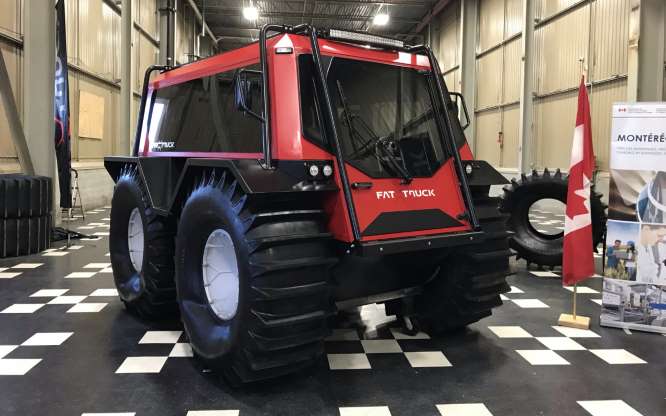 Link to the full article